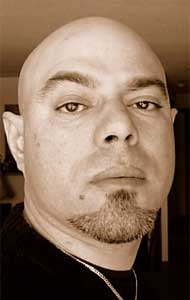 Alone, and when no one else dared, this man of principle, stood against the Conspiracy Theorists, and their calumnists in the media, to win a stunning landmark victory against the claim that there were Morrisseau forgeries, that he had them, and that he was part of the scam involved in selling them.

In 2007 the second Morrisseau related law suit came about when the Conspiracy Theorists decided to become a party to convincing a naïve journalist, Val Ross of the Toronto Globe, into speaking for them.

On Jan 1, 2007, a woman came up to Michael Moniz, who had just become the winning bidder on a Morrisseau painting, “Father and Son 1977,” at a Randy Potter auction, in Port Hope, Ontario, and sneered at him.

“Huh! So you think you bought a real Morrisseau, do you?”

Michael was completely taken aback, and speechless. He didn’t even know who she was.

Years later, after coming across her photo, he immediately recognized her as Val Ross, the Toronto Globe and Mail’s elite Arts reporter.

I realized recently, from photos I had taken, that I, too, had been in the auction hall on the very same day, and anonymously rubbed elbows with them both, though I did not know either of them, or that we would all meet again, years later, in the cyberspace of this investigative article. 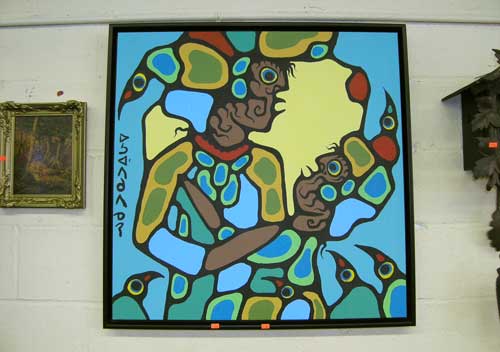 This event was to precipitate the second Morrisseau-related court case.

Gabor Vadas who had lost total credibility in a dishonest attack on Joseph Otavnik, and Aaron Milrad, Norval’s lawyer, now picked another target, convincing Val Ross – let’s call her CT Proxy #2 –of the Globe to publish their “expert opinion” that the painting “Father & Son 1977,” owned by collector and retailer, Michael Moniz, was a fake, and that he was part of a scam operation selling fake Morrisseaus on ebay. 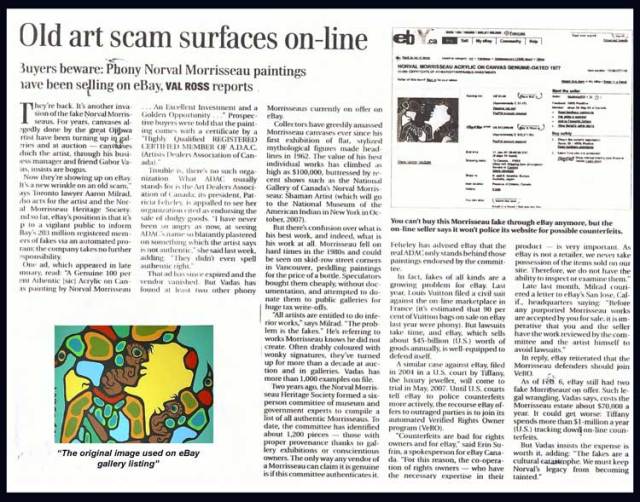 I have not the slightest doubt, that Val’s death, only months after Moniz launched his court case, was hastened by the fact she realized she had been duped into publishing the most erroneous and damning article she had ever written in her entire life. She was on heavy anti-depressant medication at the time. She did not live to see the man she defamed, vindicated by the courts. One of many victims of the Conspiracy Theorists.

They were cited as her authorities, in a story she wrote, which became the worst journalistic faux pas in Canadian art history.

Michael Moniz, showing enormous courage, and firm in his resolve to take an ethical stand against creeps, no matter how prominent, who defamed him and his painting, launched a lawsuit against the biggest media conglomerate in Canada, CTVglobemedia.

And then he went to an independent forensic scientist to rule on the authenticity of his painting. 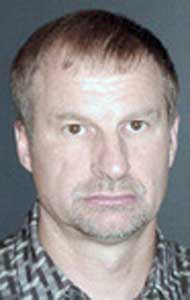 Brian Lindblom, one of Canada’s top forensic scientists and handwriting analysis experts, was the first to bring scientific method to analyze the signature DNA on the back of Morrisseau paintings that several wild Conspiracy Theorists were loudly claiming in the media, every chance they got, was all just forged. Canadians started to ask, why would they possibly say that, and keep on saying it, even as Brian continued to add more evaluations on other paintings, uncovering even more damning proof that they were just wrong, damningly wrong, again, and again…

On Nov 5, 2008, one of Canada’s top forensic document examiners and handwriting analysis experts, Brian Lindblom, found that the painting “Father & Son 1977,” which had been publicly defamed by the Conspiracy Theorists, and by Val Ross, and the Globe, as a forgery, in fact, had been signed with DNA certainty, by Norval Morrisseau, and that no one else could have.

The Globe backed off big time – with Vadas and Milrad heading for the hills – all obviously scared shitless from their inability to produce independently verifiable proof to back up their claims in front of a judge.

They all clearly feared the wrath of an independent judge, and the damning penalty he would have imposed on them, for defaming Moniz and his painting with their obviously fraudulent claims.

The Globe lawyers begged Moniz to settle out of court, paying him off with an estimated $25,000 in compensation for libeling him and defaming his painting “Father & Son 1977.”

They were so utterly ashamed of what they had done, that the Globe forced a “Gag Order” on Moniz.

(The defamed painting had a rough market value of $25,000 so I believe that would have been the core amount of any settlement, especially if Moniz demanded court costs as well, which would certainly have been granted by a judge, since that is the top award available in Small Claims Court where Moniz filed his lawsuit.) 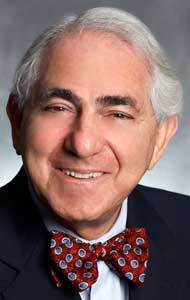 Aaron Milrad has repeatedly sought out the media spotlight, to make himself the centre of a public debate, by deliberately stoking the fires of controversy with his wild Conspiracy Theory of thousands of forgeries by a syndicate of diabolical forgers. This was one of his bravura performances.

If Globe executives were decent, principled, or ethical, they should have, under the circumstances, done a correction story as big as the malicious and defamatory original, which was circulating in cyberspace as true, for years afterward, long after they had furtively expunged it from their Internet archives.

I am not aware that Aaron Milrad, a lawyer, or Gabor Vadas ever issued Michael Moniz an apology for the awful personal stress they caused him to suffer, and for damage to his private life which can never be recovered.

I am not aware if Aaron Milrad, a lawyer, or Gabor Vadas, ever issued a public apology or a retraction for their part in a wrong-headed witch hunt which contributed to sending Val to an early grave.

What do two huge “court case losses” in a row, prove about the credibility of Gabe Vadas, Aaron Milrad, and the dying Morrisseau himself, whom they always quoted, as trustworthy authenticators of his art?