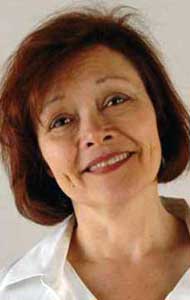 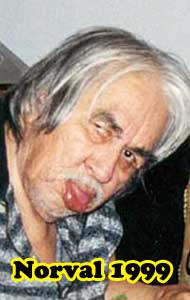 Conspiracy Theorist Proxy #1, Norval Morrisseau, let himself fall into the clutches of the white men around his wheelchair. He had to pay $11,000 in compensation to Joe Otavnik when he called a Morrisseau that he had forgotten he had painted, a forgery.

Summary: There have been eight (8) court cases (5 completed – 3 pending) dealing with the issue of supposed Morrisseau forgeries, from 2006 til 2013. Many of these cases featured Conspiracy Theorist Proxies – hapless, ignorant, gullible, trusting, neophyte art collectors who became the manipulated tools of Conspiracy Theorists.

The five completed court cases were ALL victories AGAINST the claims of the Conspiracy Theorists and their Proxies, that the paintings at issue, were forgeries. 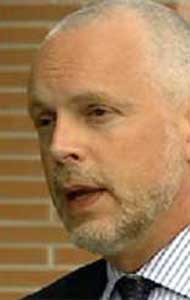 CT Proxy #3, Dr. Jonathan Browne, lost a wonderful painting in 2008, when he falsely called a genuine Morrisseau a fake. He compounded his folly by passing a little old lady school teacher straight into the arms of the Conspiracy Theorists. His recommendation  has set her back some $40,000 in legal fees, and got her to also hate a genuine Morrisseau painting she once loved…

Astonishingly, in two cases the Conspiracy Theorists actually begged for out-of-court settlements, resulting in them having to pay huge financial awards after forensic scientists ruled that the paintings they had defamed, were, in actual fact, with DNA certainty, authentically signed works by Norval Morrisseau. 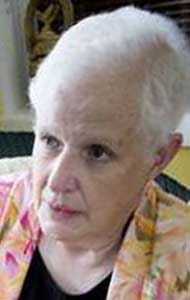 Ms. Margaret Hatfield, CT Proxy #4, lost some $40,000 and counting, by not practicing due diligence, and following bad advice, from the Conspiracy Theorists, in starting to hate a genuine Morrisseau painting she once loved.

More astonishingly the first case resulted the artist himself, Norval Morrisseau, having to pay a huge cash settlement for a false claim of forgery.

The second, even larger award went against the Globe and Mail and the false claims of their top Arts journalist. 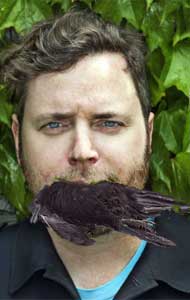 CT Proxy #5, Kevin Hearn, we predict without the slightest doubt, will end up eating something unpalatable for being the latest neophyte art collector to fail to practice due diligence, preferring to become a willing tool in the hands of the Conspiracy Theorists.

In the other cases, all the allegations of forgery were massively overturned when three different top Canadian forensic scientists ruled the paintings in question  and alleged to be fakes, were, in fact, authentically signed by Norval Morrisseau, and that no one else could have done so.

The forgery allegations in the Hatfield case, which last heard testimony in June 2012, has not even been dignified with a finding by the judge. It was to have been rendered on Sept. 25, 2012. As of March 2013, he has declined to even recognize the Plaintiff’s claim with a finding. The painting at issue has also been forensically authenticated as signed by Morrisseau.

The Hearn case, another attempt by the Conspiracy Theorists to get a neophyte art collector – Kevin Hearn of the Bare Naked Ladies – to become Proxy #5, and use his money to advance their bogus allegations, has stalled in the courts as the word is spreading that A Gigantic Hoax is underway, and Hearn is just the latest victim who will lose scores of thousands of dollars in a court case he can never, ever, hope to win.

The science, the facts, and history, is against him. 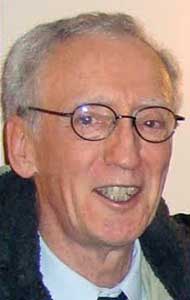 “Mr. Smith” AKA Principal Morrisseau Dealer AKA Principal Conspiracy Theorist Donald Robinson. No one in Canadian art history has ever before, so aggressively sought out the media spotlight for himself, by setting out to deliberately place himself, and his Conspiracy Theory about supposed Morrisseau forgeries, at the centre of a public discussion from one end of the country to the other. One can only wonder, why a person would support a Conspiracy Theory that is universally discredited by the scientific community, and put at obvious risk his entire credibility as a Morrisseau authenticator of any level.

ASTONISHING BUT TRUE – Not in the 13 years, and counting, since Donald Robinson announced in the National Post, on May 18, 2001, that he had supposedly discovered thousands of Morrisseau forgeries, by umpteen forgers, has he, or any of his white business partners surrounding Norval’s wheelchair, ever taken a single forger or forgery to the police, or the courts… Ever…

And when they had the chance to lay their proof for forgers and forgeries out before a judge, they ran, like hell, for the exit… and paid people off, rather than facing a judge in court.

SHOCKING BUT TRUE – Not once, in the last 13 years of his life, did Norval Morrisseau, the man credited by all the white businessmen surrounding his wheelchair, with starting the Conspiracy Theory of “thousands of forgeries by umpteen forgers,” ever take a single forger, or forgery, person or business, to court for any reason whatsoever.

MORE SHOCKERS, BUT TRUE – The RCMP, after spending millions of dollars over several years, investigating the Robinson allegations of “thousands of forgeries by umpteen forgers” closed its investigation without charging a single person, or business, either with making forgeries, or for selling forgeries… end of story…

COMPARE – When Canadian master forger Richard McClintock (Glossary) tried to sell only two (2) forgeries in Montreal, he was immediately arrested, convicted, and sentenced by a judge.

MORE SHOCKING, BUT TRUE – Not once, in the 13 years since they “discovered” the thousands of forgeries by umpteen forgers, have Donald and Paul Robinson taken a single person to court, not for making forgeries, or for selling forgeries, even though they have publicly accused many decent people and reputable businesses of being involved…

UNBELIEVABLY SHOCKING BUT TRUE – DONALD & PAUL ROBINSON “SHOOTING THE MESSENGER” – After 13 years of never going after a single forger or forgery in the courts, the owners of the Kinsman Robinson Galleries of Toronto, have finally started to go to court, but only to launch vile SLAPP suits (Glossary) to “shoot” investigative journalists researching exactly what, and who, is behind the Conspiracy Theory of “thousands of forgeries, by umpteen forgers.”

Can anyone figure out why they would possibly do this…?

Table of Contents of Posts to come:

The Conspiracy Theorists, Their Proxies & the Courts 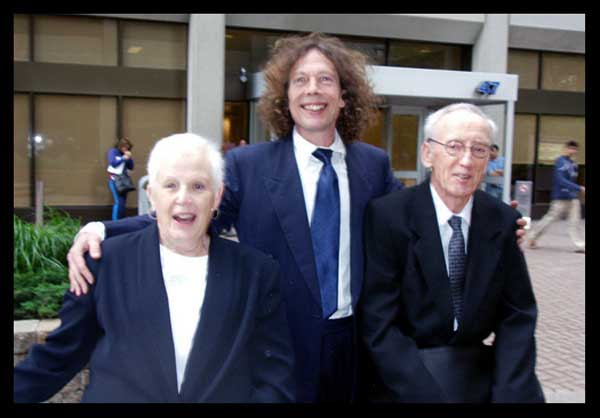 The Collaborators Outside the Court – Probably the most damaging photo ever published about a judicial proceeding in Canadian history; I predict it will be used in legal text books, by generations to come. It features the master manipulator Ritchie Sinclair, with his arms around the people he brought together to help promote his personal vendetta against Canadian collectors of Norval Morrisseau art: Margaret Hatfield, the misguided beginning art collector who repeatedly drove hundreds of miles to give Sinclair support when he was sued by Joseph Otavnik in 2010 for defaming his painting. Sinclair then talked her into launching her own lawsuit against a highly reputable art gallery which had dared to decline being a dealer for Sinclair’s art. She would waste some $40,000 of her paltry pension in a dead end pursuit to try to turn a genuine Morrisseau she had bought, into a forgery. The most damning inclusion in this “buddy” or “pals” photo op, is Donald Robinson. He was supposed to be appearing as an “expert witness,” to be “pals” with no one but the judge; in other words be an independent, arm’s length resource for the court, and be above any and all partisan behaviour and appearances. Deputy Judge Paul Martial originally said he trusted Robinson to behave like an “expert witness” in his courtroom. Numerous lawyers and informed observers have since wondered how the Deputy Judge could ever grant him “expert witness” status in the first place, as he is a fierce partisan in the lawsuit, an aggressive business competitor of the Defendant, and a ferocious advocate of the Conspiracy Theory, by which he has been able to make millions of dollars for himself, his family, and his business. Robinson’s willing appearance in this “pals” photo, shows in spades, and echoes, the fiercely partisan nature of his testimony in court, and illustrates why the judge will regret to his dying day a momentary lapse that gave Robinson a status in court for which he was totally unqualified. Robinson went on to prove it with his highly aggressive and partisan outbursts in his court testimony, and then taking part in this partisan ”up yours judge” photo op. Deputy Judge Martial’s huge judicial gaffe probably explains why he, who has had nine months and counting, since the last court hearing, to make a ruling, has refused to publish his findings…

After a five day trial over two years, Deputy Judge Paul Martial was to announce his findings on Sep. 25, 2012, but refused to do so, on that date or in the five months and counting since. By not ruling he signaled that he refused to recognize the Plaintiff’s Claim that Artworld of Sherway had sold her a forgery. He further refused to rule that the painting “Wheel of Life 1979” is a fake, or indeed, damaged by the allegations which he refused to dignify with a reply. Under Court Rules he never needs to rule. So rendering the lawsuit and the reasons for launching it null and void.

It is his way of saying that “Wheel of Life 1979,” is an authentic Morrisseau and the Plaintiff’s claim fraudulent.

Why would anyone want to shoot the messenger…?

Bonus Feature: “The Case of the Missing Paintings”